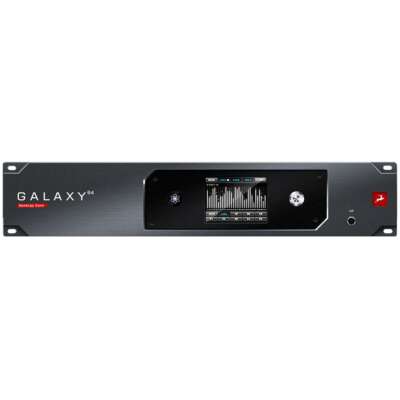 All-in-one Audio Interface featuring 64 channels of analog I/O, Thunderbolt 3, Dante, HDX and Onboard DSP processing, equipped to handle all audio going in and out of your production facility or live sound rig.

Antelope Audio Galaxy 64 Synergy Core is a high-end recording system that connects your entire studio within a 2U rack space while providing high-fidelity audio and onboard effects processing for your most demanding projects. With Dante, HDX and Thunderbolt connectivity, the world’s first 64-channel AD/DA converter offers unbeatable flexibility when moving sound around your high-profile production facility, live stage, broadcast, or other enterprise applications.

Made for Critical Listening

Galaxy 64 employs high-quality converters providing the lowest Total Harmonic Distortion and Signal-To-Noise ratio in units of its kind. It also boasts a generous 124dB of dynamic range on the AD stage, 128dB at the DA stage and 130dB at the monitor outputs. The converters achieve precise and transparent conversion with accurate transient reproduction. The Galaxy 64 does not require external converters for monitoring and facilitates critical listening without added coloration by virtue of its mastering-grade monitor outputs.
More Information
Reviews
Write Your Own Review