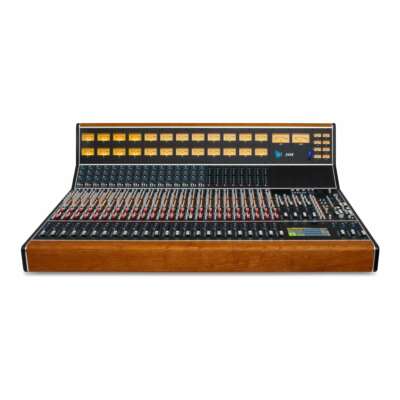 The API 2448 analog recording and mixing console is a dual-signal path, inline recording console based on the vintage 1604 and classic 1608 consoles, but provides 24 channels of multitrack recording and 56 channels for mixing. The 2448 offers a powerful and impressive feature set including Dual Inputs on each channel, Stereo Returns and optionally, API's new cross-platform Final Touch fader automation system. The 2448 expands API's powerful line of world-class analog recording consoles and continues API's nearly 50 year legacy of combining functionality and reliability with the unmistakable warmth of the API sound.

The 2448 is a “dual-channel” or “in-line” console. Each channel strip provides two independent, discrete audio paths for multitrack recording and mixing. The Large Fader path (input and tracking) and the Small Fader path (playback & monitoring). Using the Program Bus to combine these 2 paths with the 4 Stereo Returns provides 56 channels of audio for mixdown. Contained within the 648C channel module, either path can be used for tracking or mixing, depending on your needs.

New: In addition to the 2448, API's Final Touch automation systems are available for the flagship Vision console, the Legacy AXS, and the 1608-II. This allows for mix files to be easily transferred across any of these API console products.

The API 2448 console carries on the tradition of legendary API analog sound and Final Touch Automation makes it the heart of any modern studio! For more information, call or chat with an RSPE representative today.