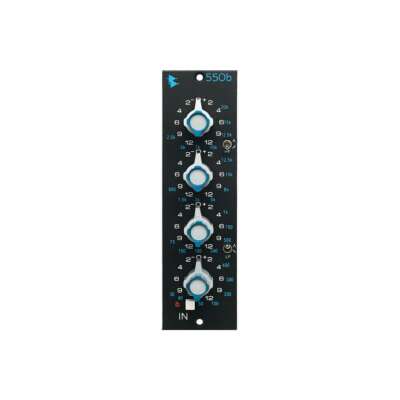 The API 550b is a modern design based on the classic API 550 and 550A. The 550b came about when API’s then owner and chief designer, Paul Wolff (1985 – 1999) was commissioned to build 75 550-style EQs for O’Henry Studios (Burbank, CA), where feature film scores and albums by notable artists such as Ray Charles, k.d. lang, The Wallflowers, and R.E.M. were recorded. The studio requested a 4-band version of the 3-band 550-type equalizers that would fit in a normal 550 chassis—and so the API 550b was born. A modern reissue of the original 550 EQ, the 550b incorporates API's exclusive circuitry innovated by API founder Saul Walker, plus proprietary components, such as the legendary API 2520 op amp. Once word got out about the API 550b, it began to outsell the 550A dramatically.

The API 550b has four EQ bands with seven switchable filter frequencies that span four to five octaves. The selectable frequencies are significantly overlapped to provide the 550b with dual functionality as both problem solver and sweetening device. These frequencies, purposely selected to be musical rather than numeric, were selected by an experienced "who's who" list of the industry's most proficient engineers, including Paul Wolff himself.

What makes the API 550b unique and musical, apart from the additional mid frequency band is the combination of Saul Walker's incomparable 2520 opamp and “Proportional Q" circuitry. Proportional Q narrows or widens EQ bandwidth depending on the amount of boost or cut applied to a selected frequency. With greater amounts of boost or cut, the bandwidth narrows, allowing for surgical correction without compromising the overall sound. For example, if you wanted to remove muddiness from an instrument, greater amounts of cut to -12dB narrows the bandwidth, removing the unwanted frequency while preserving the body of the instrument. Less gain applied to boost/cut widens the Q for a more musical sweetening effect. Another advantage of API’s Proportional Q is the near-elimination of phase shift, a malady found in many parametric equalizers.

In addition, the reciprocal nature of the 550b enables the user to "undo" what has been done previously with exact precision. With a surprisingly wide range of tonal variations, the 500b is an invaluable and professional audio tool with great flexibility and excellent sonic ability.

API’s 2520 Op Amp found in the 550A is given most of the credit for the API sound. Designed by API engineers, the 2520 is a high-gain, wide-band, direct-coupled amplifier specifically designed for audio applications. The circuit derives its characteristics mainly from the performance of its passive elements, being connected into a feedback loop, which provides predictable, stable performance. Furthermore, the discrete 10-transistor amplifier is encapsulated in a thermally conductive epoxy that protects against thermal shock, vibration, and humidity, assuring long life and reliable performance

Making use of API's "Proportional Q," an innovation designed by Saul Walker in the '60s, the 550b intuitively widens the filter bandwidth at minimal settings and narrows it at higher settings without the need for additional bandwidth controls. This unique feature minimizes the "phase-shift" sound found in many equalizers.

API 550b Outside The Box

Operating the API 550b is simplicity itself, which is what makes it so effective as an audio tool, since you can get creative without fighting complicated controls. The API 550b has four dual-concentric, custom API aluminum rotary knobs that select frequency and apply gain. The stepped center knob selects one of seven center frequencies in each band. The outer knob boosts or cuts the selected frequency by ±12dB. The low and high bands are peak/shelf switchable EQ, which are selected by positive-action, military grade toggle switches. The 550b’s low-mid and mid-high bands are peaking type EQ. At the bottom of the front panel is a silent EQ in/out switch that allows EQ to be switched in and out of the signal path silently.


Do or undo, there is no try

The reciprocal nature of the 550b enables the user to “undo” what has been done previously. The benefits of the API 550b are most obvious to those who work with EQ on a continuous basis. The 550b’s ability to affect or reverse tonal modifications is perhaps the most important feature. If major tonal restructuring is required, the extraordinary headroom made possible with API’s 2520 opamp offers predictable and gentle analog performance under duress. With a surprisingly wide range of tonal variations, you can do no better than the API 550b—the force is strong with this one.

Why settle for three bands of amazing API EQ when you can have four bands with an API 550B. For more information, call or chat with an RSPE representative today.