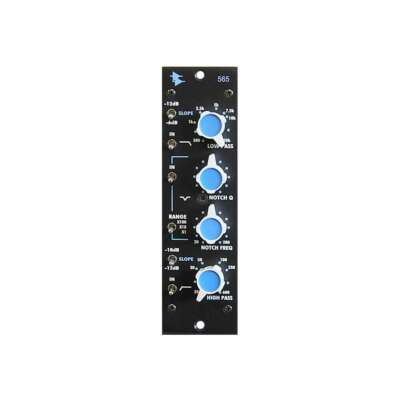 The 565 Filter Bank is a sweepable filter, designed specifically to contour the sound to preserve the natural tone of the signal. Its extreme flexibility, repeatable settings and superb sound make it ideal for all studio, live sound and broadcast applications. The 565 includes a sweepable low-pass filter, sweepable high-pass filter and a fully sweepable variable notch filter. The 565 Filter Bank module has circuits that are true to the musical filters of the famed 215 module found in large format API consoles.

API’s 2520 Op Amp found in the 505-DI is given most of the credit for the API sound. Designed by API engineers, the 2520 is a high-gain, wide-band, direct-coupled amplifier specifically designed for audio applications. The circuit derives its characteristics mainly from the performance of its passive elements, being connected into a feedback loop, which provides predictable, stable performance. Furthermore, the discrete 10-transistor amplifier is encapsulated in a thermally conductive epoxy that protects against thermal shock, vibration, and humidity, assuring long life and reliable performance.

In total, the elegant simplicity of 2520 discrete operational amplifier provides the core of the API sound.

The API 565 can mean the difference between a good mix and the perfect mix! For more information, call or chat with an RSPE representative today.