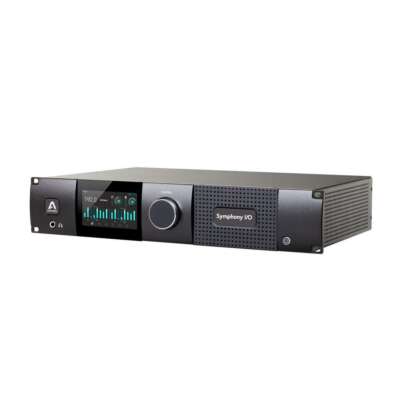 Symphony I/O Mk II HD can be utilized alongside or in place of Avid® or Digidesign® interfaces for Pro Tools HD.

Each I/O module installed in Symphony I/O Mk II HD appears and functions in Pro Tools HD the same if it were a separate Avid HD I/O interface, so set up is easy and you can take advantage of important Pro Tools features such as sample-accurate delay compensation.

While the phrase, “Apogee’s legendary sound quality” certainly applies, there’s no need to trot out that old cliché. Everyone who’s been making records for the last two decades knows about Apogee sound. They also knew that Apogee converters had a slight coloration, one that many found pleasing, but certain applications demand the ultimate in transparency. The advantage of transparent recording is that you’re not locked into a specific coloration, which can turn a unit into a one-trick pony. And should you desire, you can always add color later—your choice of color. To create its next-generation converters, Apogee focused its 25 years of award winning design experience to create its best-sounding and most transparent converters to date.

Symphony I/O Mk II includes the most refined analog-to-digital converter Apogee has ever designed. The analog stage uses the same fully differential op-amps as found in the original Symphony I/O, but now in a circuit precisely streamlined to provide the most transparent path to the A/D stage possible. A Dual Sum A/D stage – where two conversion stages are summed for each analog channel – offers the lowest distortion and greatest dynamic range of any A/D converter Apogee has ever designed – you get digital recordings that are true to your analog inspiration.

Tired of outgrowing your gear or discovering that your needs for expandability have diverged from your original plan—and finding yourself cobbling together a complicated, cumbersome system? Those days too, are gone because Apogee Symphony I/O can grow with you. Starting with your base configuration of choice (2x6, 8x8, 16x16, or 8x8 with 8 mic preamps), Symphony I/O can easily expand as your studio grows via two rear-panel module slots, which offer the capacity for up to 32 inputs and outputs of A/D-D/A conversion per unit. Currently, Apogee offers five* I/O modules plus the 8 Mic Pre** eight-channel preamp module.

Symphony’s I/O modules are designed to future-proof your investment in flagship Apogee sound quality. If you own an original Symphony I/O, the Symphony I/O Mk II chassis can increase the longevity of your system by offering backwards compatibility with first generation 2×6, 8×8, 16×16 and 8 channel mic preamp I/O modules.

All of Symphony I/O Mk II’s essential input and output settings can be accessed from the front panel touchscreen. Change your input selection, monitoring levels, mic pre gain or calibrate your Symphony I/O Mk II to match the levels of the other analog gear in your system. A high-resolution TFT display delivers all the visual feedback critical for recording and monitoring. Without looking at your computer, Symphony I/O Mk II lets you see metering for up to 64 channels of I/O, 32 IN x 32 OUT – signal levels, polarity, muting, phantom power and Soft Limit.

The rear panel of the Symphony I/O is where the modular magic happens. It has two module slots and is capable of up to 32 channels of I/O in various combinations (depending on module choice), plus PCI, USB 2.0, and Ethernet (for future connectivity). The base unit also features word clock connectors and termination, plus a quiet, high-performance, digitally controlled fan for cool running.