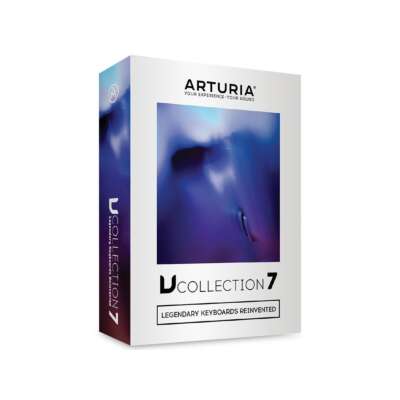 Arturia V Collection 7 has grown into the premier collection of virtual instruments, featuring 24 timeless synths, organs, pianos, and more - lovingly recreated in software and modernized with features you could only dream the hardware had.


With V Collection 7 you can turn a classic monosynth into a polysynth at the flick of a switch. Load your own samples into a vintage sound engine with drag and drop. Add oscillators, add filters, add modulation and effects. You can enjoy these instruments however you want: in their original spec, with all the contemporary updates, or somewhere in between. The choice is yours.

V Collection 7, the latest incarnation of Analog Lab, gives you instant access to the 8,000+ preset sounds contained within all of the V Collection instruments, and lets you browse, navigate, and audition every one with ease. You’ll never be stuck for inspiration again.

Mellotron V (new in V Collection 7)
This original instrument redefined what keyboard players could do, unlocking the doors to orchestral and choral sounds at the touch of a key.

CZ V (new in V Collection 7)
The budget synth that became a legend in its own right. The instrument that brought the digital synth revolution to the masses is now at your command.

Synthi V (new in V Collection 7)
The quirky British “silver machine” that put a new spin on modular synthesis, reborn in software with exciting new tricks up its sleeve.

Analog Lab 4 (new in V Collection 7)
Personalize your own perfect keyboard, with over 8,000 amazing presets, perfect integration, effects, and a built-in live mode. Your go-to choice for inspiration.

B-3 V 2 (new in V Collection 7)
Arturia's recreation of Hammond’s legendary organ has received a total sound engine overhaul, making it the most authentic, vibrant electric organ virtual instrument ever.

ARP2600 V
This classic earned its reputation as a staple for clear, bright leads and basses a la “Frankenstein” and “Birdland”, as well as sound design such as the voice of R2D2. Its semi-modular design featured normalized connections you can override with a patch cord, making it a great tool for learning and exploring synthesis. Our version has tons of enhancements including polyphony, tracking generator modules, 1601 sequencer, and effects.

Buchla Easel V
Recreating Don Buchla’s leftfield analog synth from 1973, the Music Easel changed the way people created sounds with performance-focused parameters, putting the focus on the artistry of being a recording artist. Perfect for exploring alternative sound design, creating ambient, widescreen textures, and unfamiliar sequences. Taking Buchla’s experimental vision one step further, Arturia have incorporated Gravity, a physics-based synth engine into their software recreation, letting you take your music where no one has gone before.

Clavinet
Arguably the most famous, influential electric keyboard of all time, the legacy of the Clavinet is everywhere. Released by Hohner in the mid-60s, its funky, energetic tone gave life to myriad genres over the decades. From disco to R&B, prog rock to pure, unadulterated pop, the percussive, soulful sound of this legendary performance keyboard is reborn in Clavinet V. Arturia’s physically modelled recreation lets you dig deeper into the instrument, changing the physical properties of the instrument, and adding classic amp and effects combos into the mix.

CMI V
Known fondly as the mother of all samplers, and a groundbreaking additive synth, the Fairlight CMI truly redefined pop music production following its release in 1979. Arturia’s recreation builds on the features of the original by providing 10 multitimbral, polyphonic slots to design your sound, real-time waveform shaping, effects, a sequencer, and even a brand new “Spectral” synth that can scan and mix sections of audio, letting you create your own wavetable synth sounds.

DX7 V
The Yamaha DX-7 needs no introduction, and its legacy is felt in charts around the world to this day. If you’ve ever listened to the radio, watched a film, or owned any 80s records, you’ll have heard the DX-7. Notoriously tricky to program, Arturia’s recreation simplifies the process by vastly improving the interface, and expands its synth capabilities with a mod matrix, customizable envelopes, extra waveforms, a 2nd LFO, effects, sequencer, arpeggiator, and more.

Farfisa V
Much lighter than a Hammond and more cutting than a Vox, the Farfisa transistor organ helped drive the effervescent sounds of ‘60s Top 40 hits, and has kept bubbling up across upbeat genres ever since. It also wanted to be a synth when it grew up, which we’ve aided by adding user-definable waveforms, DAW sync for tremolo/repeat, more envelope control and integral effects.

Matrix-12 V
One of the finest analog poly synths ever made, the Matrix-12 featured the big brassy Oberheim sound, unparalleled matrix modulation, and unprecedented 15-mode filters. Each of the 12 voices could have its own sound assigned to any MIDI channel and key range, making for massive layered textures and complex splits. We’ve expanded it with even more mod sources and a 27 x 47 matrix.

Mini V
Probably the most famous synth in history and sporting a discography to match, this monosynth is legendary for its fat, warm basses and leads owing to its three VCOs and 12db/octave filter. We partnered with Bob Moog himself with massive updates including polyphony (a la Memorymoog), a dedicated modulation LFO, formant-based vocal filter, sample/hold, mod matrix, parameter automation, and preset morphing.

Modular V
The Modular system started the entire electronic music revolution, and is still one of the most powerful and huge-sounding synths ever. While largely used for diatonic music, its patch-cord based interface yielded complete sonic and creative flexibility. We collaborated with Bob Moog to update this behemoth with programmable presets, polyphony, nine VCOs, three VCFs and rare original modules like the Bode 1620 frequency shifter.

Piano V
Piano V delivers nine world-class pianos, ranging from 9’ concert grands to studio uprights to unconventional designs. Rather than stacks of samples, they’re all based on our award-winning modeling technology applied to the sound and mechanics—strings, hammers, sound boards, mic positions and more. Finally there’s a piano emulation you’ll truly love playing. Just choose a preset and play, or customize your own.

Prophet V
Prophet V combines the famous Prophet 5 with the later Prophet VS. As the first fully programmable polyphonic synth, the subtractive-synthesis Prophet 5 was everywhere in the late ‘70s. The VS used vector synthesis, with X-Y joystick morphing of its four oscillators—each containing one of 128 different digital waveforms. Our Hybrid mode adds matrix modulation to combine elements of both instruments for bold new sounds.

SEM V
Tom Oberheim’s SEM was one of the first self-contained synth modules and was further distinguished by its unique 12db-octave multimode filter. His first polyphonic synth was actually a combination of individual SEMs connected to a digital scanning keyboard which, since each voice was slightly different, gave it a very alive sound. We’ve recreated an 8-voice version with added modulation matrix, noise, sub-oscillator, arpeggiator and portamento.

Solina V
Before poly synths and samplers, the Solina string machine borrowed top-octave divider technology from organs and married it with animated choruses to deliver lush string textures that samples still can’t fully duplicate. We set up both the original mono and later stereo versions, included the phaser effect popularized by Jean-Michel Jarre, added voices inspired by the Polymoog and more, making it the perfect pad machine.

Stage-73 V
The tine-based electric pianos of the ‘60s and ‘70s featured a rounder sound and longer sustain than the competing Wurlitzers. They’ve been used by a who’s who of keyboardists, especially for jazz, funk and ballads. We modeled the Stage 73 and Suitcase 73 right down to the tines, pickups and circuitry. We also included a tube amp model and classic effects for the full experience.

Synclavier V
The Synclavier V faithfully recreates and improves on the elite digital synthesizer that powered some of the biggest hits and film soundtracks of the early ‘80s. Its unique fusion of additive and FM synthesis technologies made for a stunningly diverse and unique universe of cinematic pads and evolving timbres. We partnered with original designer Cameron Jones to faithfully build the only emulation ever attempted.

VOX Continental V
The transistor-based Vox Continental became popular in the ‘60s as a much lighter and affordable alternative to Hammonds. While it borrowed Hammond’s drawbar construct, the Vox had an eager pop-ready sound all its own that was quickly adopted in the British Invasion and West Coast hit factories. We’ve included the later Jennings J70 engine alternative, and added full drawbars, extra waveforms, rotary cabinet, and effects.

Wurli V
The reed-based electric piano was brighter and tighter that the Rhodes. Mellow at lower velocities, its voice took on a rougher bark as it was played harder. This made it a favored electric piano for rock and funk players—and another perfect example of something that our physical modeling nails that sampling can’t. We’ve added lots of tone-shaping options, guitar amp, rotary speaker and effects boxes.