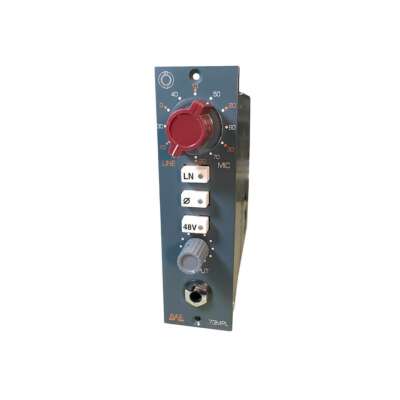 The BAE 1073MPL is the no-compromise 500 Series version of the 1073MP. a mic pre-amp version of the 1073 equalizer. The 1073MPL has the same well-known characteristic Class A sound with its harmonically rich low end, slight resonant highs, and maintained focused mids. Two selectable impedances makes the 1073MPL work well with a variety of microphones. As a coloured and versatile mic-pre, the 1073MPL maintains its sonic signature across a wide bandwidth.

Usually, designing for the 500-series format means trade-offs in terms of components, power and current handling, and ultimately sound quality. BAE, the purveyors of true Neve sound, decided that if they were going to build a 500 compatible module of the BAE 1073MP, it was going to be spot-on to the original. They managed to come up with a 500-series 1073MP that was equal in sound quality to the 10-series module.

Because BAE had no intention of compromising the sound quality of the 1073MPL, the BAE 1073MPL is engineered in exactly the same way as the originals: the same chassis construction (naturally with a different layout), connectors, printed circuit board layouts, hand-wired looms, and circuitry. Built using the same parts as the 10-series module, the 1073MPL features Carnhill transformers and Canford wire—making the BAE 1073MPL one of the best-sounding Class A, 500-series mic pre/EQ modules around.

Don’t have enough space in your 500-series lunchbox for a BAE 1073MPL? No worries! BAE makes the 3LB 3-space lunchbox designed to fit one 1073MPL; a 6-space rack/lunchbox] to hold two; and an 11-space 500-series power rack, which will hold three BAE 1073MPL Mic Pre/EQs with two spaces left over for BAE’s 312a 500-series mic preamp, if you’re looking to load up on vintage punch.

"BAE has been an integral part of my record making for many, many years now. I have owned the mic pre's, EQ's, and racks for years. The dedication to costumer service is something one can count on. With the advent of the Avedis 1122 OpAmp, the classic 2520 opamp was brought forward into the future. Mark has also made a point at looking back at certain designs and his attention to detail shows in the new products that he is working on. I am very happy to announce and toast Mark's (Loughman) new ownership in the company. I forecast excellent things to come. — Ross Hogarth, Grammy-winning producer-engineer


“What all 312a users say about clarity and punch is absolutely true. They are very versatile pre amps and aside from the obvious with guitars, drums, and vocals, I really enjoy using these pre's with bass and synth sequences.” Ilan Rubin (NIN, Paramore, Lostprophets)


“I love my BAE mic pre-amp. It makes my tracks sound lovelier!” — Jane Wiedlin, The Go-Go's


“I was just screwing around with my BAE 1084 when it hit me, wonder what my Space Bass would sound like in this. I plugged it in and the sound was so pure and natural I thought I was on stage in the ‘Mothership.’ This thing sings with tone, punch, and straight-up good, solid sound that will stand out in a mix with loud drums and guitars.” – Bootsy Collins


“Two thumbs way up! In my opinion, the BAE 1073 and 1084 modules sound every bit as good as the original Neve modules I have used my whole career (we've had blind fold audio "shoot out" tests in my vintage Neve room and there is absolutely no difference). Nothing comes as close to my original Neve EQ/mic preamps as BAE products. And in my opinion, BAE products surpass all the competition in build quality; from the point-to-point wiring, to the audio traces on their cards, original St Ives (Carnhill) transformers, nickel plating, impeccable craftsmanship, and wow! —no old dirty switches and pots. (Did I mention they plugged right in to my vintage Neve 8014 frame from 1970 flawlessly!) Plus, Mark and the staff over at BAE are totally professional and a pleasure to deal with.” — Andy Kravitz, drummer, producer, engineer

Answering to a higher authority (maintaining the legacy of Mr. Rupert Neve), BAE puts nothing but the very best and their very best into every unit they built. Under the guidance of president/CEO Mark Loughman and Neve guru, Avedis Kifedjian, BAE uses the only highest quality components from the original suppliers, such as Carnhill (formerly St. Ives) and Jensen. All BAE products use discrete electronics and are completely hand-built and wired point-to point (no circuit boards). For more information about BAE, check out RSPE’s Designer’s Perspective feature and get a first-hand look at the inner workings of BAE.

Add the classic Neve sound to your 500-series rack with BAE’s 1073MPL, plus greater frequency control and precision performance. Check out RSPE’s Rack Revolution custom 500-series module builder and get started now, or call or chat with an RSPE representative today.