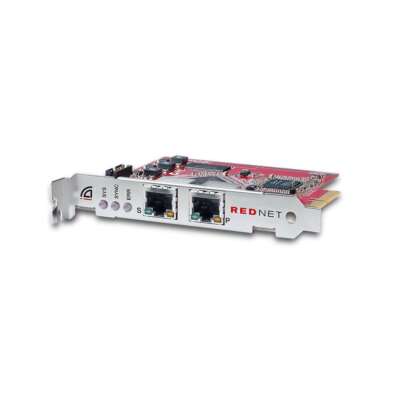 RedNet PCIeR features 128 Channels of low-latency I/O and Ethernet Redundancy in a PCIe interface card for PC and Mac.

Focusrite RedNet PCIeR card combines 128 channels of extremely low latency I/O with Ethernet redundancy, offering the best possible system performance coupled with exceptional reliability. The card requires a standard PCIe slot in a Windows or Mac computer and delivers up to 128 channels I/O with under 3ms latency*. Dual RJ45 Gigabit Ethernet connectors switch automatically according to network availability and link the audio computer to the rest of the network

RedNet is a system that enables you to distribute audio at near zero-latency and high channel counts through standard Ethernet cabling. At its heart is DanteTM, the robust digital audio networking technology developed by Audinate. Dante uses standard IP-based networking components, such as Ethernet cables, routers and switches, to carry a virtually unlimited number of channels of high-resolution digital audio over a standard Ethernet network. Dante has been tried and tested in the live sound arena for years, where it is effectively a de facto standard.

Now Focusrite brings Dante into the studio as part of a complete audio system. RedNet comprises a range of extremely high-quality audio interfaces and components that do more than save you time and money on cabling: they revolutionise the way you work across the board.

Unlike other digital audio systems, RedNet is non-proprietary. Your audio computer system can run any audio software you want: you are not locked into a single system. RedNet is fully-compatible with any ASIO or Core Audio compliant DAW software, including Pro Tools®, Logic® and Nuendo®.

Designed with multiple audio applications in mind – from Live Sound rigs to Multi-room Recording Studios, Houses of Worship, Audio Distribution Installations, Post Production environments and anything in-between – fundamentally RedNet is an extremely scalable, near zero latency audio distribution system that can be used to expand I/O channel count, interface digital components, and/or bridge between Pro Tools|HD or MADI and the Dante audio network.

Incorporating Focusrite’s most advanced AD/DA conversion to date, rock-stable JetPLL clocking and premium multi-layered board circuitry, RedNet is no exception to the company’s philosophy that ‘Sound is Everything’. With every design detail meticulously engineered, RedNet is a step above its I/O competition, providing some of the most transparent and pristine audio quality available – with the added benefit of the systems’ revolutionary networking capabilities.

Harnessing the power of Dante’s tried and tested digital audio networking system, RedNet forms an extremely scalable, modular audio distribution system that is compatible with any other Dante enabled products.

RedNet’s modular “building block” design means that each system can be specified with any combination of RedNet units to ensure your system has the right type and quantity of I/O exactly where you need them.

With many different options for interfacing with other hardware, whether it's MADI, AES 3, analogue, Mac, PC, Pro Tools|HD, or Dante-based products - RedNet will function with a huge range of devices and features multiple connectivity options.