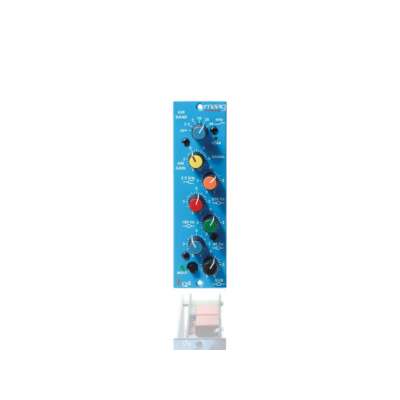 The inheritor of the Nightpro EQ3 and EQ3-D equalizer’s revered Air Band® high-shelving EQ, the 500-series Mäag Audio EQ4 is a single-channel, 6-band equalizer featuring Maag Audio’s legendary Air Band high-frequency shelf boost. Because the it operates with minimal phase shift, the EQ4 provides near-perfect sonic transparency and top-end presence while preserving the natural sound quality of your mix. Specifically designed for the 500-series Lunchbox® portable format, the Maag Audio EQ4 not only offers the Air Band, which alone is worth the price of admission, the EQ4 offers five other sonically superior band passes. Used by the top names in mixing, the Maag Audio EQ4 also features detent controls for easily recallable settings.

INSIDE THE BOX — Maag Audio EQ4

Because of the Maag Audio EQ4’s unique design, phase shift is very minimal. This helps you maintain the integrity of the original sound and enhance the “Air” frequencies, while tonally shaping the sound from the top to the bottom. The lack of phase shift and the AIR BAND make the EQ4 great on anything that needs EQ shaping.

The EQ4’s band passes all interact with each other. Increasing the AIR BAND gain will also increase the overall gain to a small extent. This is normal and is a necessary byproduct of the design. This happens because of the interaction (summing) of the AIR BAND with all of the other band passes. This interaction is a necessary part of the design to ensure the integrity of the sound is maintained. To compensate for the added overall gain, simply turn down each of the 5 band pass knobs equal amounts. An example would be two clicks down on all 5 knobs. The EQ will remain the same shape, but the overall gain will be lowered. This compensates for the extra gain added from the interaction of the boosted band passes.

This is the correct way to get the desired results from the Maag Audio EQ4. Here is another way to look at it: If lifting a desired frequency, you may want to consider bringing down the level of the other band passes above and or below; always remembering the band passes interact with each other. This is a different approach from other typical equalizers.

Understanding how the band passes and the AIR BAND interact in the Maag Audio EQ4, will help you better shape your sound; providing unparalleled transparency and top end presence while maintaining the true natural sound behind the source.

OUTSIDE THE BOX — Maag Audio PREQ4

The front-panel controls of the sky-blue Maag EQ4 include:
To ensure compatibility with API 500-6B lunchbox and 500VPR rack systems, Maag Audio is an official member of the VPR Alliance.

"Maag EQ's have been living on my mix buss since I got them! The AIR BAND has been a game changer!" Sean McLaughlin - Award Winning Mixer/Producer/Engineer (Sarah Blacker, Matchbox Twenty, Queensryche, Girls Guns & Glory, OldJack)

"The Maag Audio EQ4 is 6 bands of awesomeness. The sub is getting a lot of use on 808 kicks at my studio. The mid bands provide excellent transparency. The 2.5kHz provides very clear bite on vocals, or less if your vocals make your eyelashes bat at loud volumes. The AIR BAND is as legendary as ever! It's an epic 500 series unit."

"The Maag Audio PREQ4 is extremely solid and the AIR BAND is worth the price of admission by itself. Whether you want to dial in a bit more presence or a lot more air, the PREQ4 has your top end covered! The AIR BAND is by far the best top end I've ever heard."
Dylan "3-D" Dresdow - Grammy award winning Mixer
(Black Eyed Peas, Usher, Michael Jackson)

"If Cliff Maag at Maag Audio makes it, I use it. Every hit, every #1, every Grammy mix I have EVER DONE featured his EQ. The EQ4 is my current favorite product from Maag Audio. As the improved Big Brother of the EQ3 I use it to EQ vocals, drums, acoustic instruments and of course the stereo buss.

The PREQ4, from Maag Audio is rapidly becoming my client's favorite preamp. As a mixer I love getting vocals that have been recorded with the PREQ4. There is very little left for me to do.”
Dave Pensado - Grammy award winning Mixer
(Black Eyed Peas, Justin Timberlake, Christina Aguilera, Pink, Destiny’s Child)

"The EQ4 makes me feel like I'm running my mixes through the "magic lamp" of EQ's, I ask, and it grants the wish while retaining everything accomplished prior to running the mix through them, and the results are always musical & coherent."
Phil Greiss, Multiple international award winning producer/composer/engineer
(Corneille, Zaho, Sean Paul, Idir, Khaled, Christophe Willem, Justin Nozuka)

"After 20+ years in the business there aren’t many things that come along that make me go WOW, but Maag Audio has done it! The EQ4 is now a part of the fiber of my being and is on every recording and mix I do."
Russ Russell, Producer, Engineer, Mixer, Musician
(Napalm Death, Dimmu Borgir, Wildhearts, Exploited, Megadeth...)

Cliff Maag, who has been a recording engineer for over 35 years, founded Mäag Audio in 2009. With a strong passion for high quality sound, Cliff is an inventor of the acclaimed NTI EQ3, Nightpro PreQ3, and EQ3D. He was also the President of Research and Development during the early years of NTI and Nightpro. The Air Band is still known to this day as an unsurpassed element of the original NTI and Nightpro gear. The Air Band is vow available in the new EQ4 and PREQ4 500 Series gear from Mäag Audio.

The Mäag Audio team has worked hard to make the technology sound and function even better than the original gear. The need and desire for the best possible sound is what has driven Cliff and the Mäag Audio team over the last 35 years and is the catalyst behind Maag Audio. Committed to excellence Maag Audio’s goal is to provide all audio engineers cutting edge technology that they need to compete in their industry.

Only the finest components are used in Mäag Audio gear. Build quality is among the highest in the professional audio industry. You can rest assured your Mäag Audio gear will perform at sonically superior levels, every day.

The secret weapon of top mixers and recording engineers, the Maag Audio EQ4 will let the air out of your 500-series rack—in a very good way. For more information, call or chat with an RSPE representative today.


This product is also available as part of the RSPE Demo 4 Free & Rental Program, click here to see the rental product page.
More Information
Reviews
Write Your Own Review