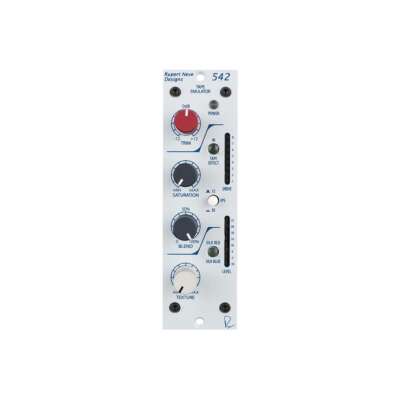 The TEC Award-nominated Rupert Neve Designs Portico 542 is a 500-series version of the Portico 5042. The 542 delivers the same thick, musical simulation of tape, plus it has some new features that offer additional sonic options for even greater creative control of program material. In addition to the Portico 542’s “true tape” circuitry, which is great for bringing out 3rd-order harmonics, the 542 also incorporates a soft-clip circuit that tames the harshest sources and enhances 2nd-order harmonics. The Portico 542 also has Rupert Neve Designs’ variable and versatile Silk/Texture circuit that gives you three transformer tones in one, and a wet/dry control to blend in the perfect amount of saturation. If you’re looking for the ultimate color box, add an RND Portico 542 Tape Emulator to your 500-series power rack.

The Portico 542 consists of a line-driving amplifier with transformer-balanced inputs and outputs. These amplifiers are capable of enhancing the sonic quality of many signal sources via galvanic isolation and freedom from grounding problems. The sonic signature is one of extreme purity and the image is consistent with that of Rupert Neve’s original designs of 35-40 years ago.

Getting the Most Out of the Portico 542

In the early days of recording, tape’s non-linearity was generally looked upon as more of a curse than a feature, and the advent of linear digital systems that has left us longing for the quirks of non-linear audio processing. Unlike linear designs, non-linear devices require the user to actively experiment with gain staging to find the “sweet spot” of the circuit. Although this requires a small amount of effort on part of the engineer, if used properly, the effect can add a dynamic aspect to performances that can enhance the impact of a song.

The non-linearity in the 542’s “True Tape” circuitry and Saturation control necessitate taking note of both drive and input levels. How levels are staged into the 542’s tape circuit can significantly impact tone, depending on the position of the saturation control and the drive level on the tape circuit. As saturation is increased, low-frequency compensation is decreased, and at a drive level of 5, the soft clipper enters the circuit. Finding the best balance point between low-frequency response, total harmonic distortion, and desired soft clipping, require playing with a combination of the saturation, trim, and blend controls, and may also include using dynamics processing and proper gain staging before the 542.

Both Silk modes are modified and fine-tuned by the “Texture” control. By manipulating the Texture control, the amount of Silk can be changed from essentially absent, to roughly four times the amount of coloration found in Silk from the original Portico Series. With Silk/Texture engaged, the distortion characteristic and harmonic content of the unit are very reminiscent of many of Rupert’s vintage class-A designs. These controls add another realm of tonal control to the 542 and should be explored creatively in conjunction with the “True Tape” for best effect.

The Portico 542 Tape Emulator controls and their functions:

Tape In: Sends the signal through the “True Tape” circuitry, which is affected by the saturation, blend and 15/30 IPS controls.

Trim: Provides ±12dB adjustment of level on incoming signal levels, prior to the tape circuit.

Additionally, to compensate for low-frequency loss at low “record head” levels, the saturation knob also controls a low-frequency compensation circuit that boosts low frequencies more at low saturation levels, and tapers off at higher levels. This function can be useful on many sources like bass and kick drum to find the balance between a clean, boosted low end (low saturation) and a denser, more saturated low end (high-saturation).

15/30 IPS: Selects the pre-emphasis/de-emphasis, record/replay tape characteristic. The 15 IPS mode has a significant “head bump” in the low frequencies centered on 60Hz, as well as a more pronounced roll-off in the high frequencies. The 30 IPS mode is generally a flatter response through the high-end with a head bump around 120Hz.

Blend: Controls the mix of pre and post tape signals, allowing the engineer to dial in a subtle amount of the tape effect to better control the amount of saturation, tone, and soft clipping in the post-blend signal. As the signal gets more saturated, dialing back the blend can be a great way to impart the feel of tape, while maintaining a similar level of detail and transparency.

**Note: The blend control does not affect the Silk and Texture controls, as that circuitry is located at the physical output of the unit.

Soft Clip: A soft clip engages in the “True Tape” circuitry when the drive meter hits 5 (first yellow LED), and becomes more apparent at higher levels. The soft clip can be used as a way to tame overly transient material like drums and can be controlled further by using the blend control.

Silk/Texture: Pushing the Silk button engages the Silk Red circuit. Pushing it a second time introduces Silk Blue circuitry. Silk reduces the negative feedback on the output transformer adding harmonic content as the texture is increased. Silk Blue mode features more saturation in the lows and low mids, whereas Silk Red accentuates the saturation in the high mids and highs.

Level/Drive Meters: Two eight-segment LED bar graph meters are fitted to the 542 for output level and drive metering. The level meter shows the output level of the 542 before the Silk circuit and the drive meter reflects the level on the “record head” when the tape effect is engaged. The soft-clip circuit is present at Drive levels above 5.

In 2005, the company acquired new premises in Wimberley, Texas to handle the increasing demand for products embodying the principles of very high musical quality that has become synonymous with Rupert Neve’s name over the years. Rupert Neve Designs announced the Portico Series in 2005 to much acclaim. The Portico Series modules are high quality analog building blocks for the front and back ends of digital systems (hence the name “Portico” as in entryway). In the years since release, the Portico Series has already garnered many important industry awards including five TEC awards, multiple PAR Excellence Awards, Mix Certified Hit Awards, and a MIPA award among others.

In 2009, the 5088 High Voltage and Discrete Mix System were released as the ultimate word in mix bus sound quality. The modular mix system is configurable to the user’s needs, and utilizes the various Portico Series modules for mic preamps and signal processing. The 90-Volt rails of the 5088 provide more than 10dB more dynamic range than any other Rupert Neve designed console, and the custom transformers on every input and output provide complete galvanic isolation. With the release of the 5088 Portico Series modules also received an update with the same style of light blue powder coating with anodized aluminum knobs.

If you’re looking to add some non-linear secret sauce to your linear digital recordings, put a Rupert Neve Designs Portico 542 Tape Emulator to your 500-series power rack. For more information, call or chat with an RSPE representative today.