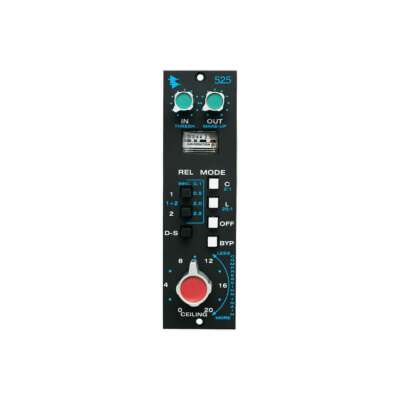 Authentic reissue of API's original 525 compressor from the early ’70s

The 500-series API 525 Discrete Compressor is a dead-on re-issue of the original modular 525 compressor/limiter. Remaining one of the most popular compressors of all time, the API 525 has a number of unique design innovations including its Ceiling control, which allows you to change compression ratio on the fly while maintaining a constant output—no gain-makeup required. Tweaking the Ceiling control brings out the body of guitars and the resonance of synthesizers. A workhorse compressor that can be linked for stereo bus operation, the API 525 particularly excels on vocals. If you’ve heard Steve Perry’s vocals with Journey, you’ve “heard” the API 525 compressor in action. The 500-series API 525 Discrete Compressor is also great for presence and thickening sounds.

Originally released in the 70's, the API 525 re-issue was built using the original blueprints and spec-control drawings from the API archives. A re-issue doesn’t get any closer than this. The API 525 is ideal for reduction of distortion due to overload or over modulation of program peaks. Attack time is as fast as 15u/s. Four auto-release modes are offered: 0.1s, 0.5s, 1.5s, and 2.0s. A de-ess function inserts an inverse vocal energy curve filter in the detector for effective sibilance/pop reduction.

The API 525’s unique Ceiling fine-tuning control offers extreme ease of operation by providing up to 20dB of compression or limiting in 2dB steps while maintaining a constant peak output level. The Ceiling control can increase gain reduction (lower threshold) while simultaneously raising output level to match, so you can adjust dynamics on the fly without level changes.

Full range of operation is achieved with signal input levels from -15dBm to +20dBm, and output capability is +24dBm through an integral output transformer. Release times vary with frequency, with high frequency/full bandwidth content released faster than lower frequencies for natural envelope tracking. Attack time is fixed, carefully chosen by API to catch the fastest peaks without pumping. Although the API 525 compressor is designed for single-channel use, two or more 525s can be linked for multi-channel compression.

The API 525 compressor employs a feedback design, which means that the input signal passes through the gain control element to the detector (or control voltage converter), which sends the control voltage back to the gain control element and on to the output. This is a self-correcting system, wherein Attack, Release, and Ratio cannot be strictly defined as they are with feed-forward designs, and will change with the operation of the feedback loop. While not as fast and accurate as a feed-forward system, the feedback design is more musical and pleasing to the ear. After all, math is our attempt to describe nature, but as renowned audio researcher Dr. Richard Heyser once said, “Nature does not solve equations.”

API’s 2520 Op Amp found in the 525 is responsible for the API sound. Designed by API engineers, the 2520 op-amp is a high-gain, wide-band, direct-coupled amplifier built specifically for audio applications. The circuit mainly derives its characteristics from the performance of its passive elements connected into the feedback loop, which provides predictable, stable performance. The 10-discrete transistor amplifier is encapsulated in a thermally conductive epoxy, which protects against thermal shock, vibration, and humidity, assuring long life and reliable performance.

Looking over the front-panel real estate of the API 525, you’ll see two small rotary controls at the top that set the initial operating parameters: Input (threshold) and Output (make-up gain). Below these controls are a Gain-Reduction Meter; Release, which are two switches that select four release times: all out = 0.1s, 1 in = 0.5s, 2 in = 1s, and all out = 2.5s; Compression switch, which sets ratio at 2:1; Limit switch for 20:1 ratio; Off switch, which shuts off the gain reduction but keeps the unit inline (to add the character of the 2520 op amp and transformers); hardwire Bypass switch; De-ess switch, which removes sibilance; and the Ceiling knob, which works the same as turning the threshold and output controls up or down at the same time. The API 525 Discrete Compressor has a balanced input and a pin-out that is the same as all the other 500 series modules.

Equally useful as a tracking, mixdown, or program compressor/limiter, the API 525 gives you vintage dynamics control and an easy-to-use, multi-function control set. For more information, call or chat with an RSPE representative today.