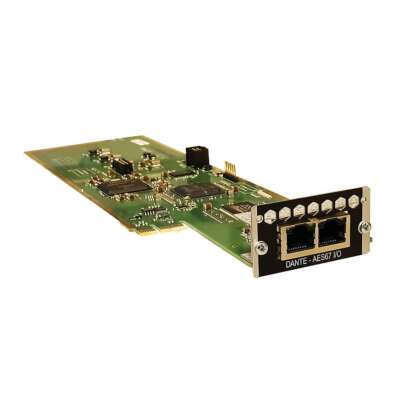 With eight slots available on MTRX for expansion cards, you could ultimately have up to 1,088 Dante/AES67 channels, including the 64 channels that comes as standard, at 48 kHz. The Dante card has onboard sample rate conversion for both input and output signals, enabling separation between the clock synchronization of the MTRX and other Dante audio devices interfacing the expansion card.


The Dante card can operate either as a single 128x128 channel interface with a switch for the two Ethernet connectors or redundantly, where the two Ethernet connecters are connected to different networks each carrying 128x128 channels. If more cards are installed, each card can be connected to a different network or more cards can be connected to the same network via an external Ethernet switch or by bridging the network between the cards when operating in non-redundant mode.

The Dante card can operate in Dante mode or AES67 mode with support for discovery via SAP. In Dante mode, Dante Domain Manager (DDM) is supported for enhanced network management functionality. Configuration of the card is managed via DADman.

The MTRX 128 Channel Dante expansion card features per-card sample rate conversion, which by using more cards allows several independent audio networks that run on individual clocks and sample rates to be connected to and unified in a single MTRX unit.

This naturally unleashes a wealth of possibilities for distributing audio across sources and destinations on highly complex setups that e.g. involve sending a feed to an OB truck, while recording at a different sample rate and sending yet another feed to a FOH console or an in-ear monitoring system.

Simply adding more Dante channels may sound trivial, but once you start to think about the actual problems that this amount of channels in combination with independent sample rate conversion is capable of solving, it’s a quite significant improvement of the overall system.

For instance, the new Dante card will immediately be able to solve real-world challenges in regard to high channel counts when working with Dolby Atmos Mastering Suite, as well as in recording studios where Dante based monitoring systems are used, but there is a need to record at a different sample rate or in Live applications where there Dante networks have to be kept physically separated when operating on different clocks.

Pro Tools | MTRX is a fully modular I/O and Monitor-Control box, enabling you to customize it with up to eight analog and/or digital audio I/O option cards to create a 64-channel interface for Pro Tools | HD. You can install a maximum of six AD and/or DA cards to support up to 48 analog channels. Or design an all-digital box—or any combination between. Just start with the Pro Tools | MTRX base unit and go from there.

Add 128 channel of low-latency Dante Audio to your Avid MTRX with this 128-Channel Dante expansion card. Or add up to 8 cards, each with independent sample rate conversion and get up 1,088 channels of Dante audio. Call or Chat an RSPE Representative to configure your Pro Tools | MTRX.